"There are only two things, God & Violet Crumble."

I heard an interesting statement in church today,
"There are only two things, God & Violet Crumble."

How our brain works is a fascinating thing, word / product / image association.
What is the image that comes to your mind when I say Africa.
Well that depends on what things to do with Africa have made an indelible impression on your mind, let me not put images into your mind of what it may be in your mind (we're all different), but allow me to share with you an image, impression and concern in mine when I hear of or think of Africa. (I have already done 6 missions trips to 4 African countries) 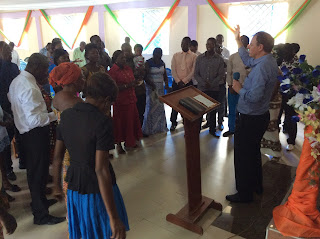 I think of thousands of ministers passionate for the gospel message of Jesus Christ that saves to the uttermost even the worst of sinners, I think of some difficult situations from rural villages  to major cities,  I think of humungous gatherings of people hungry for the gospel truth, I think of leaders crying out for help on how to teach their congregations that Jesus has already won their victory. For most, they know it but they don't know it. I mean they have heard it, they even give a mental assent to the truth of it but they themselves don't know how to live in it so how can they impart the revelation of truth of it to the congregations. They are hungry for revelation knowledge of the word that will sustain them.

On the other hand I also think of many churches where the pastors are almost worshiped, they adore adulation, sitting mightily on throne like chairs before their congregations and having their members do everything for them; gaining at least three titles is tantamount to dictatorial rule and as a consequence substantial financial gain, these doctrinally shallow leaders keep their people in the same shallowness so that their position in the pecking order is not disturbed, it just too good being adored and having everything materially conceivable even through many of their congregations are often struggling to put food in their children's mouths.

Whilst there are people in every country and from every walk of life that abuse privilege Jesus showed us a form of leadership not like the world, he demonstrated and taught servant leadership. Paul the apostle of Bible writings was first of all a persecutor of the church than an advocate of it. He received revelation of who we (the church) were in Christ, that other disciples who were disciples before him said, "some of Paul's teachings are hard to understand." Yes they are, for they are not to be understood with the soul/mind but with the spirit. Paul said these things are spiritually discerned.

My heart and passion is to help people become spiritually minded enough to receive the revelation of who they are in Christ, that they know how to live in it daily, that they don't need to be lording it over others but can in true humility help believers to have the confidence in Christ for every situation that He intended for us. When you mention Africa to me, the picture I see is of thousands of leaders receiving understanding of what Christ has done for them and how to both appropriate it themselves and release others into the freedom it brings for them.

To this end Beautiful Feet Task Force is again ministering in Africa the revelation of Jesus Christ to hundreds of pastors and leaders. I expect there will be all types there, some there for good intent and others for selfish. Some there who are healthy strong servant leaders and others who have not yet realised that releasing people into their destiny actually releases you into yours.

I'd like to take you on this journey with me, sadly for this trip you can only come in prayer, in giving and virtually, (we will be posting to facebook as much as possible during the trip - Follow here) 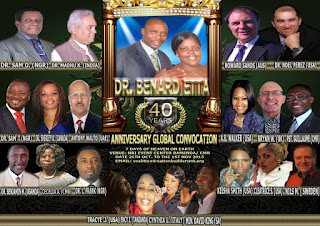 From 23 October 2015 Ps Howard will be heading to Bamende, Cameroon as one of many guest speakers of Dr Bernard Etta at the '40th Anniversary Global Convocation' along with guests from many parts of the world. 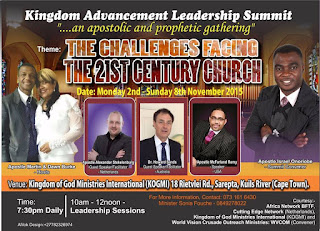 Then its on to Cape Town, South Africa for the jointly organised 'Kingdom Advancement Leadership Summit,' hundreds of leaders from Southern Africa particularly are expected to attend. 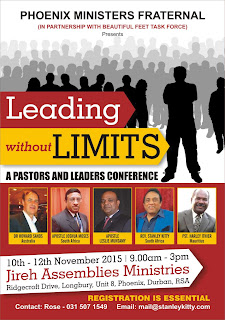 After this, BFTF with the Pheonix Ministers Fraternal are hosting 'Leading Without Limits' in Durban, South Africa.

During these programs and many local church functions Ps Howard will be (with others) helping many hundreds of leaders lift their revelation of who Christ is in them, what He has done for them and what He wants to do through them.

The church in Africa is growing much faster than the western church and yet the need for sound teaching and revelation of who we are in Christ has become greater than ever because of rampant poor, shallow and wrong teaching that has kept many bound in law and limited knowledge of the freedom found in Christ.

Will you help bring freedom to thousands through supporting hundreds of leaders across Africa with revelation knowledge.

You can support BFTF in these ways.
PRAY - SEND - GO - FOLLOW


PRAY especially on days of international mission
SEND support these missions with your gifts
GO join a team whenever a team is going.
FOLLOW BFTF on social media