Imagine our joy, four years after visiting Eden Park and seeing the situation, only 2 wells for a community of a few thousand people, no running water, walking hundreds of meters many times a day to the well to buy water for every day needs drinking, bathing, toilets, washing, cooking etc for the community at Eden Park. We were moved to do something about it. Finally an arrangement was set for Australian tax deductible gifts to go to the provision of water wells in Tanzania and a man Dennis D Daniel appointed as our in country representative, to source the right locations, and arrange with the local contractors to put in the wells at various locations where needed as approved by our AUSAID partner Global Development Group.

Now the trip we had planned was coming about, even though there were some concerns and all had not gone according to plan, (how little did we really know at that point of the problems they had faced in Tanzania). We were on our way, 3 Aussies to inspect and open the well at Eden Park near Dar es Salaam, Tanzania's biggest city and commercial centre.  I find it incredible to believe that 5 minutes from the international airport in the country's biggest city, there is no running water.

After arriving and settling in to our hotel, we went to the site of the well at Eden Park Healing Ministry, somewhat discouraged that the building was not yet complete although the well was completed and had previously been operating and providing water to the community, now it was closed at the request of the engineers because vandals had broken down the office and tower for the water tanks to sit on top of  and the engineer was gravely concerned for contamination of the well. 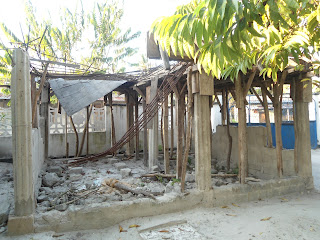 A long time the building had been broken down, and embarrassed to advise us in Australia, our in country partner had gone looking to try and raise the necessary funds to rebuild the office and tower and buy a new tank to replace the one damaged in the vandalism. Months had gone by, now we were here to open the well and it was not yet finished.
The building engineer had requested to hold off on putting the water tank on top of the building until the concrete had set well and now the building had to be finished. As those few days passed we saw the building get completed and the tank erected. The windows and doors were put in, the walls rendered and painted inside and out.

Prior to opening the well about 50-60 people went with us and the local band and paraded around the local area with great music, singing, dancing and shouting and inviting the locals to come to the opening of the well.
What a great time of rejoicing it was. The local community of Kipunguni hadn't seen anything like it before; and so we returned to Eden Park and officially opened the first well of BFTF Living Water Wells on Wednesday 10th October 2012.

There is more work to be done on the next well project, but now a head office for the wells project has been opened and a supervisor appointed to care for the administration of reports and water sales at Kipunguni and preparation for more water wells in needy Tanzania.

We welcome interested parties to enquire about partnering with us in this great project by donating or coming on our next trip to open more wells.