ONE MAN OR WOMAN CAN MAKE ALL THE DIFFERENCE!!

ONE MAN OR WOMAN
CAN MAKE ALL THE DIFFERENCE!!

"And I sought for a man among them, that should make up the hedge, and stand in the gap before me for the land, that I should not destroy it: but I found none" (Ezekiel 22:30, KJV).

In 1858, a Boston Sunday School teacher named Kimball began visiting one of his students at the shoe store where he worked as a clerk. Eventually he led him to Christ. That student's name was D.L. Moody.

Twenty-one years later, Moody, now an evangelist, visited London, and a great spiritual awakening took place. F. B. Meyer, a local Pastor, went to hear Moody, and his life was transformed.
Later Meyer went to America to preach, and in one of his meetings a student named J. Wilbur Chapman got saved.

Chapman became active in the YMCA, where he met and discipled a former baseball player called Billy Sunday. Sunday became a great revivalist, and in one of his crusades in Charlotte, a group of businessmen came to Christ.

A year later they decided that their city needed another crusade, so they invited Mordecai Hamm to be their speaker. 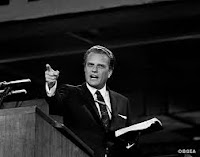 After 3 weeks Hamm left town, discouraged because he'd only had one convert ~ a 12 year-old boy called Billy Graham!

One Sunday school teacher started it all! One brother, Andrew, led another brother called Peter to Christ (John 1:39-42); and Peter brought multitudes.

One person ~ just one ~ can make all the difference.
You can be that one!
– Author Unknown.
Posted by Beautiful Feet Task Force at 18:04